Long before Amelie’s traveling gnome, and long before Phoebe Buffay’s Smelly Cat, there was… an object of rare distinction which kept a handful of Dallasites entertained all throughout the nineties.

Once upon a time I fulfilled the duties of Petit Big Cheese at an animal hospital. I got to be the Cheese which suited my Napoleonic complex to a T, and I got to enforce Big Big Cheese’s unpopular policies which felt singularly against nature. Neither here, nor there. My management philosophy incorporated a good deal of prank components. I believed that keeping the troops silly entertained once in a while fostered camaraderie and generated a better climate in the work place.

Mr. A, a patron of the practice, seemed to all like a man of irreproachable taste. Always dressed impeccably and exuding sophistication, he simply exemplified class. Sadly, his beloved kitty succumbed to cancer despite our best efforts.

A week after the cat’s tragic demise, Mr. A. showed up at the practice bearing a gift for the Big Big Cheese. She unwrapped the beautiful silk paper, opened the box, delicately removed the soft tissue papers and came face to face with this:

Big Big Cheese paused. Was Mr. A. playing a trick on her or was he actually serious? She opted for erring on the side of caution and thanked him profusely for his beautiful present. He told her that the cat’s green glass eyes reminded him of those of his belated cat. Unthinkable acts originate from unbearable grief.

Ugly Yellow Plastic Cat lived at the hospital for years. We re-gifted it amongst ourselves at each birthday. By the time another celebration came about, we would have completely forgotten about the ugly beast and were always surprised when we opened the box.

Nothing could instantly relax the atmosphere of a stressful day as well as Ugly Yellow Plastic Cat.

A nurse who had a bad day would monitor the boarding webcam and suddenly the yellow cat would appear out of nowhere.

Ugly Yellow Plastic Cat would get x-rayed and the film would be left on the viewing box of an exam room just before a doctor stepped in with a client.

We would find him in the cage of the dog that barked incessantly and the unnerving situation would be instantly diffused.

He would help with difficult feline pre-anesthesia procedures.

Our electrician contractor even caught him once fornicating with Piglet in the wiring closet.

I decided to take it home to Belgium for Christmas. I figured it would be interesting to see how many people I could convince to pose with the ugliest yellow plastic cat that ever existed. At the airport, he posed with the shoe shiner.

He also posed with the National Guard which was a bit of a tour de force, don’t you think?

Once in the plane, he had to meet the captain. I don’t think that right after 9/11, Ugly Yellow Plastic Cats were supposed to visit the cockpit, so I’ve somewhat concealed the identity of the aviator in the photograph.

Brussels unfortunately did not do much for Yellow Ugly Plastic Cat. The snow and gloomy gray skies bore on his soul like a ton of bricks.

We emigrated to the Island of Porquerolles in the south of France, and in the sun Ugly Yellow Plastic Cat thrived.

We went to the Vigiles, and he posed one last time with the Mediterranean sea as backdrop, before heading to Nice to catch our plane back to Freedom land.

All good things must come to an end. Back at the hospital, Ugly Yellow Plastic Cat became a bit of a nuisance. Big Big Cheese thought we spent way too much time fooling around with it. The straw that broke the Cheese’s rind happened a day where stress was at its peak, and, out of sheer hysteria, we dangled the poor Ugly Yellow Plastic Cat in front of Big Big Cheese’s surveillance monitor. 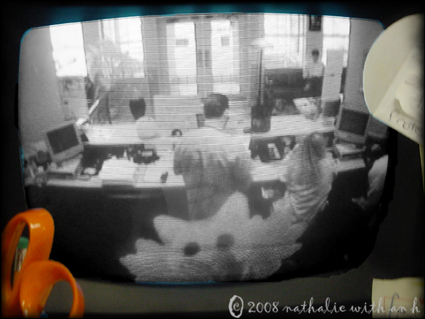 The statuette was retired to a drawer. Years later, when I left the practice, I could not help but catnap Ugly Yellow Plastic Cat. I get attached to uglicious objects. Today, he happily resides on my mantel with white glow-in-the-dark gnome. It is a lovely conversation piece.

While my last wishes do not include internment with the plastic monstrosity, Ugly Plastic Yellow Cat remains a prized possession. A symbol of a decade of fun in a tensed work environment. There were many other pranks along the years including a male stripper I hired to pose as a deranged new client of very very conservative Big Big Cheese. I don’t think he would have fitted on my mantel quite as nicely though.