Each Wednesday, Club Rush in Dallas hosts a Best Chest Body Conetest (sic… or word play, who knows!) Something tells me I would not stand a chance of winning. When their float appeared, it seemed evident that the Wednesday weekly contest had not played out in vain… 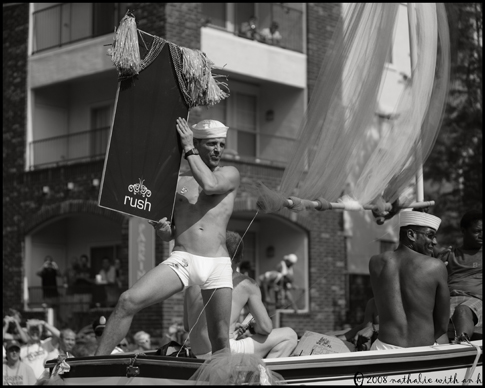 “Saying nothing… sometimes says the most.” Emily Dickinson (not referring to a sailor)

I’ve always wanted to see a mermaid. I had imagined them less muscular.

Club Rush won the Trophy for Best Costume this year.

So this year, the Best Costume award went to Club Rush. I would not have much of a problem with that if it weren’t for the fact that, except for the mermaid, none of the guys were actually wearing costumes. They were all prancing around in their skivvies. I’m probably missing the whole point.