The Night I joined the Peace Core

It was a dark school night of March when Dorin the Cougar showed me the full extent of her groupiness (in the spiritual sense, not Pamela De Barres way – which would make this post much juicier but even cougars have morals nowadays. sigh.) I had had hints of her fierce rock ‘n roll  attitude in the past but had never really had the pleasure to witness it first hand.

For her birthday week-end, Dorin had driven more than 200 miles to Oklahoma City on Friday to catch a concert of Roger Clyne and the Peacemaker (RCPM for the initiated – and I will consider you initiated for the rest of this story), then had come back to Dallas on Saturday to attend The Old 97’s gig, and on Sunday night, she picked me up and drove another 40 miles to go see… RCPM play AGAIN! Thank goodness for the environment it’s not her birthday very often!

After duly plugging my ears and breathing a set of second hand smoke from The Drams (good but hellbent on destroying lung tissue), I saw Dorin head to the bar and order tequila shots in anticipation of the main event – the shots, not for her… but for front man Roger Clyne.  Along the edge of the stage, tiny glasses began to appear from all directions. A tradition. A bit like buying beer for the sushi chef in a mark of appreciation. But beforehand. The atmosphere was quite friendly. People seemed to recognize each other from previous shows, and were exchanging hellos and knowing smiles. Dude, love was in the air. 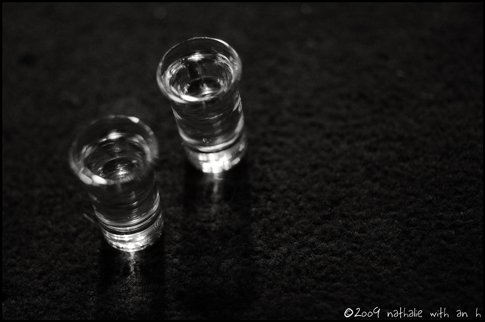 Then… there was Tim. Young blond Tim with the huge sombrero. Tim who was celebrating his birthday. Tim who knew no one  at the beginning of the show and was everybody’s best friend at the end (but I doubt he remembers any of this very clearly.) 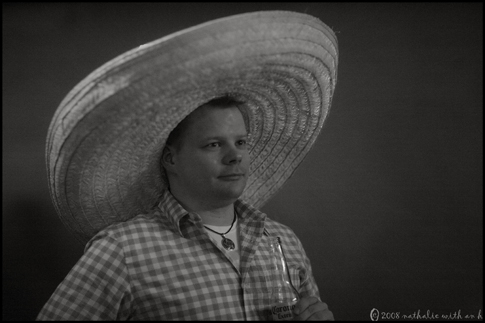 Roger Clyne and the Peacemakers were born out of the ashes of the Refreshments (think “Banditos” or the King of the Hill’s theme song.) The band split in 98 not through lack of talent, but unsupported by new management at Mercury records, and plagued by various personal problems of band members (think rock ‘n roll: drugs and nervous breakdowns.) 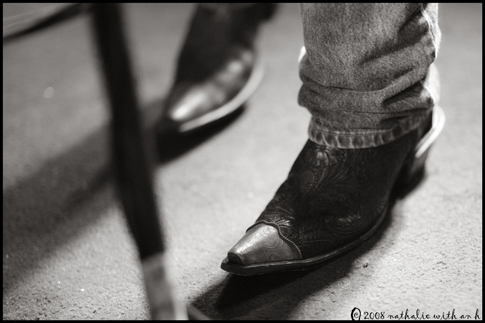 When offers from other record companies did not pile up in the mail, freshly unRefreshed Roger Clyne, a ranger’s son who majored in anthropology and psychology at Arizona State, and P.H. Naffah, the quiet drummer with the pre-med degree, packed backpacks and guitars and set out to the desert near Tucson in search of a new direction. The soul searching venture was to last the biblical 40 days… but it got hot and they ended up in a bar after 17 days (which Roger deemed plenty.) They took the resulting songs to Phoenix bars for happy hours, and fairly rapidly received an enthusiastic response from the audience. The band with the name of a Colt bringing out peace was created.

The Peacemakers never benefited from the support of a major label. As an independent band, they had to gain their audience the hard way: “Get in the van and pour your heart out for two hours every – single – show” Clyne commented in the documentary “Long ride Home.” Fans began to follow the band from town to town. This first vague of traveling adulators called themselves the Texas Troublemakers. They are the reason why, to this day, the musicians select a different set list for every show and make sure to pack enough clothes never to have to wear the same outfit two days on the row. They’d, like, totally get called on it.
.

Not just anyone could join the troublemakers. Oh no siree! You first had to be initiated to belong (which basically meant you hung out with these folks for a few days, and if they liked you, you were in.) They used to wear nametags at RCPM concerts. They even gave Roger his own: “Hello, my name is Roger” that he stuck on his guitar, and a “Roger for President” bumper sticker that he put on the back of the instrument. There always was a genuine connection between the band and its fans.
. 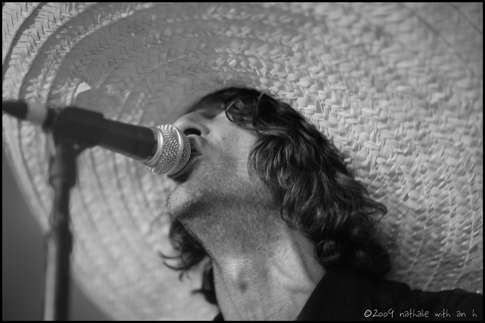 .
The current second vague of rabid fans constitutes the Peace Core. The prevailing attitude is largely that the band makes music for them and the fans give back in their own way. Their faithful following always propels the band instantly to the top ten internet sale chart when they release a new CD… Quite the accomplishment for an independent band.
.

.
It’s not rare to see a Peace Core member come to a concert bearing gifts. The boys like their sweets! I have it under good authority that P.H. likes anything butterscotch and I surmise Roger likes Tequila – 100% Blue Agave – more than anything else in the “things that you ingest” world. Home-cooked meals are a hit for guys who spend most of the year on the road: Dorin even has a friend who brings spaghetti at their concerts!
After studying the band for the sake of this story, I suggest gifts of fireworks (you would not believe the excitation provoked by the sight of Evil Warlock or Monkey Car exploding devices!)
.

.
Talking about fireworks, twice a year, the Peacemakers stage a big concert (4 hour set – 50 songs) in Puerto Penasco in Mexico, a three-day Circus Mexicus Extravaganza where the musicians mix in casually with the audience at functions such as the Mananathon, formerly known as “hangover brunch” on Sunday. Over the years, the almost intimate gathering which started in 2000 has become a huge deal where thousands descend for a week-end of music, tequila, and the sea (oh, of course, the boys detonate a shitload of fireworks too!)  Some old fans long for the days where only a few hundreds of them made the trip down to the Sea of Cortez and the accent was a little less on the partying aspect. But for now, let’s just hope that the swine flu scare does not affect attendance too much this year – the next Extravaganza is scheduled to take place from June 5th through June 7th, 2009.
.

.
The Peace Core most definitely possesses a sense of ownership. It’s their band. The attachment appears almost cultish in nature. The current line-up includes only two members of the original band: Roger and P.H., and every time the band sheds one of its own, you’d think it’s the frigging end of the world! The new musician has big shoes to fill. Pressure… The same sinking feeling happens when, with the band’s increasing success, the old fans have to fight their way to the front of the stage. It did not use to be that way. They are “losing” their band to strangers… and young’uns too! How dare they?!
. 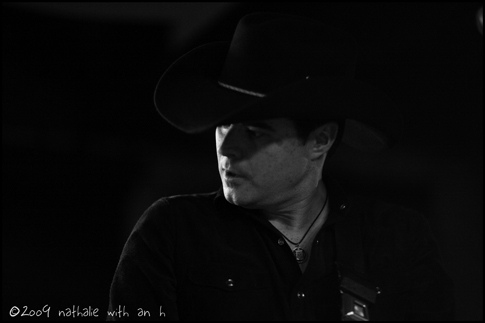 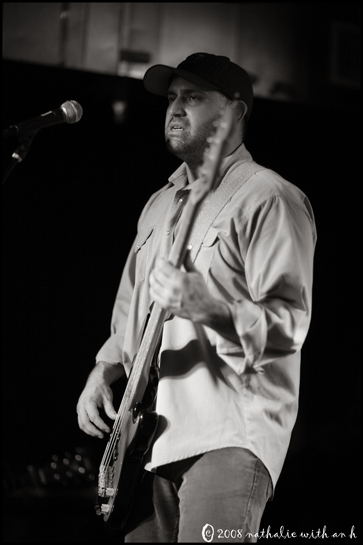 P.H. Naffah on drums
I’m no rock critic. I count strings before being able to tell the difference between the bass player and the guitarist. In other words, I’m the least qualified individual to speak in knowing terms about music. All I know is when these guys hit the stage, they deliver with crazy energy and conviction. The Clyne dude has the charisma of two Obamas and he is funny too. It’s bandido rock at its best!
. 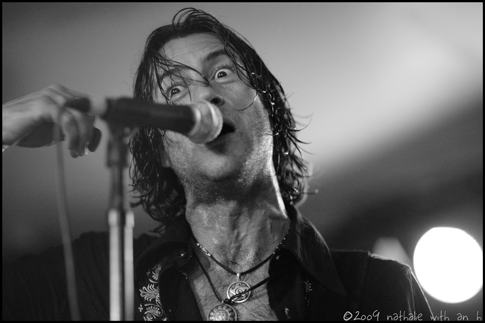 .
Audience response? The attendants freakishly know all the lyrics and sing along like it’s gospel except what’s lauded here is the love of tequila amidst other southwestern themes. In 2007, Clyne even produced his own 1,000 bottles of Tequila, Mexican Moonshine.
.

Clyne meditating amongst the pinas destined to be chopped, roasted, shredded and fermented into tequila
. 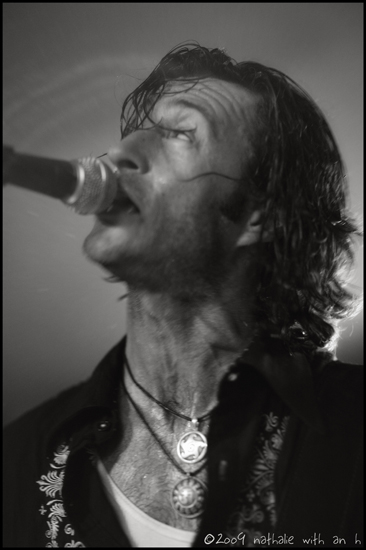 .
What is also cool about this band is that their independence gives them the opportunity to explore uncharted territories and relate the experience to their fans. In January 08, the band rented a small seaside house in Mexico, and produced 8 songs in 8 days, “from creative impetus to final mix.” J. boots, the official videographer (self-taught guitarist at 27, former roomate of American Pie’s Steve Stiffler, and compelled occasional trumpet player) filmed the experience which was then shared every day on the RCPM site. The end result was the CD “Turbo Ocho.”
This year, breaking grounds once again, they are unveiling their new musical endeavor “Glow in the Dark”, one song at the time, on their website… Website which is currently kaput but no one is perfect and they sent out a nice note to all their fans to acknowledge the problem.
.

J Boots (a hottie in his own right)

In the end, I understand better now why my buddy Dorin shows so much interest in this band. I’m converted (in a non-practicing sort of way.) More than anything, these are lovable good guys that play intelligent organic rock (I mean organic in the sense that they don’t rely on any fancy shmancy clicktracks or samplings – it’s just the four dudes with vocals, guitars, bass and drums… and J Boots being thrown on stage with a trumpet occasionally.) They do it the hard way, trying to ride a very fine line between art and being able to pay their bills, and it’s in my nature to root for the underdogs (especially quality mutts.)

After the show, they hang out a bit, talking to the fans and letting them take pictures. 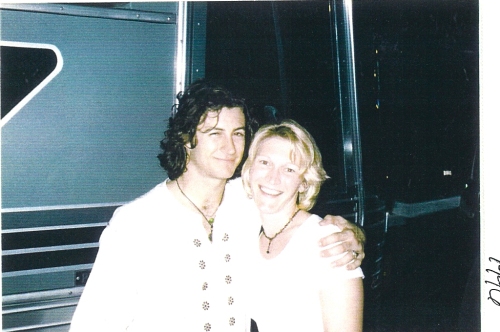 After the photo op, it was time to go home, but then our good friend Tim showed up, walking what seemed to be a winding sidewalk, and crushing his sombrero on the wall for balance while his poor loyal pal tried to put some sense into him: “Tim, man, you’ll be plastered all over the net tomorrow!” Well it took a little longer than that… but to prove your friend right, here it is: 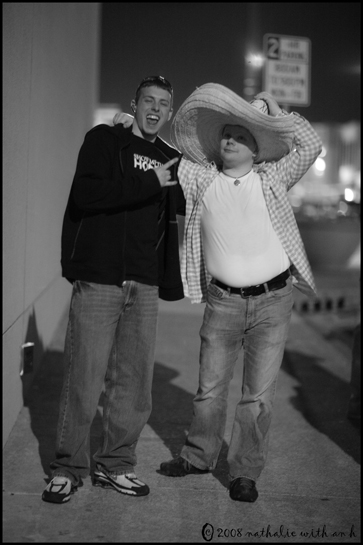 For the people who regularily read my blog, you’re probably wondering about my subject matter this time. Not exactly my usual stuff. I just had so much fun at their concert I felt it would be a good thing to spread the love. Their next gig in Dallas is on May 9th, 2009, at House of Blues… but a word of caution to the newbies out there, I have first dibs on front row. I would not want the love to come back and bite me in the bottom either.

I have pillaged many many sources to write this sprawling piece of more or less random facts: the brain of Dorin and her Troublemaker friends, the Canadian documentary “Long Ride Home”, The article “Tequila-Fueled Tunes” from High Country News, the interview of Roger Clyne by Keith Howardson from Americana Music Times, fan posts, and other articles I failed to bookmark because I’m imperfect.  Alas.

See y’all at House of Blues!

27 responses to “The Night I joined the Peace Core”