Religion confuses me greatly. Raised in Belgium, a country where you either are catholic or not religious for the most part, I was a bit puzzled when first exposed to the myriad of different Christian denominations that exist in the US.

Japan with its mixture of Buddhism and Shinto left me confounded as well. The two co-exist in harmony and even complement each other. For example, a large number of weddings are held in Shinto style, but death being considered a source of impurity, most funerals are Buddhist ceremonies. Shinto Gods are called kami but many Buddhists view them as manifestations of Buddha.

Ross took me to Nikko to visit the Toshogu Shinto shrine (which also contains Buddhist elements – of course!) It is dedicated to the kami of Ieyasu who founded the Tokugawa Shogunate which ruled Japan from 1603 through 1867. To create a worthy shrine for the Shogun, 15,000 craftsmen worked for two years (just like for the Scottish castle!) and used 2.5 million sheets of gold leaf. 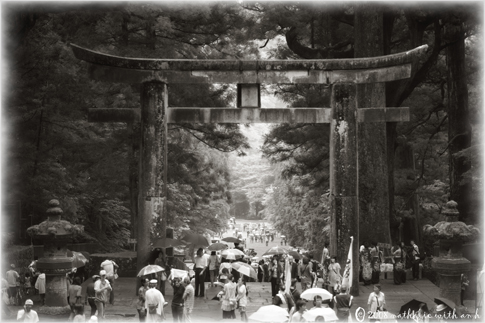 One of the telling signs you are entering a Shinto shrine and not a temple is a torii gate. This is the Ishidorii, one of the three best stone torii gates in Japan. The complex of shrines is surrounded by a magnificent forest of over 13,000 cedar trees.

The original seventeenth century five storied pagoda burned in 1815 and was rebuilt three years later. It has no floors inside, no foundations and contains a suspended pole which swings like a pendulum from the fourth floor to maintain the equilibrium of the pagoda during earthquakes. 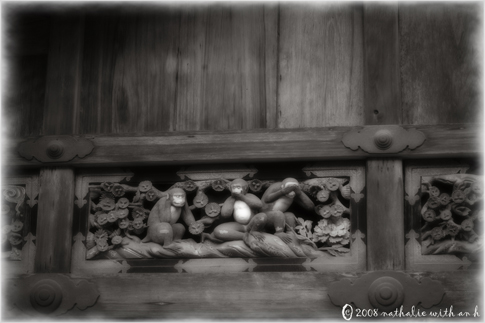 The Sacred Stable (Shinkyusha), is traditionally home to an Imperial white horse, a gift of New Zealand. The horse stays at the stable a few hours a day except when it rains or snows. It was raining on the day we visited so I did not get to see it.

I was wondering why so many people were standing around the empty building until I suddenly recognized the famous Three Wise Monkeys carving on the facade. The maxim originated out of a wordplay on “zaru” which means monkey, but is also an archaic negative verb conjugation.

Monkeys have been considered guardian protectors of horses since early times in Japan.

Another famous carving is that of the “Imaginary Elephant” on the Kamijinko, one of the three sacred warehouses. Why imaginary? The Chief Carver, Tanyu Kano had never seen an elephant therefore liberties were definitely taken for the representation. 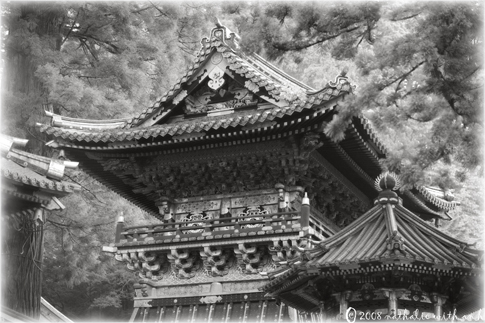 While most Shinto shrines are characterized by a minimalist architecture that blends in the surroundings, Toshogu appears much more Chinese in its lavish intricate decoration, colors and representations of dragons, birds, flowers, and sages. Some are said to be repelled by its gaudiness but I found it mesmerizing. I would not want it in my living room but such splendor in the forest felt magical. 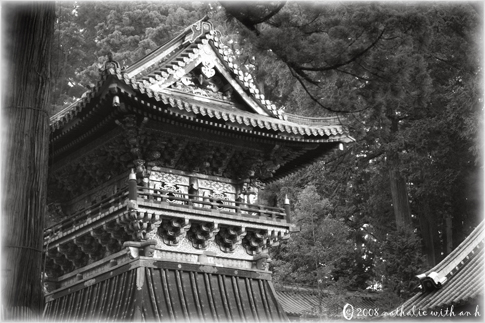 The mausoleum of Ieyasu in comparison to the pictured constructions is very simple but I took no photographs of it. You have to climb 200 very steep steps to accede his tomb and there were just way too many other things to see without exerting yourself in the process. My mother would kill me, but disown me first. I’m glad she does not read my blog. 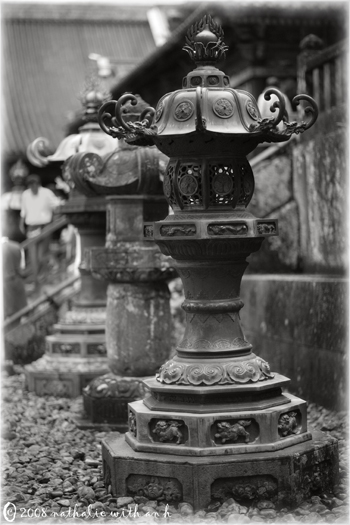 The lanterns are very beautiful. There are more than 120, all donated by warlords.

This one has an added human element. 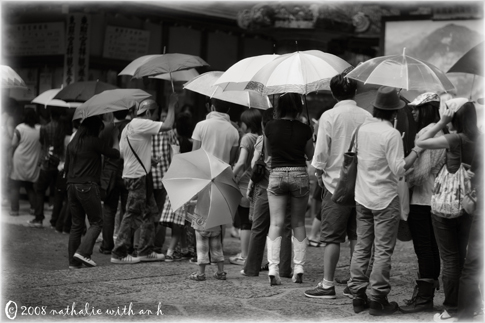 There were a lot of people despite the rain. Some seemed more appropriately dressed than others. 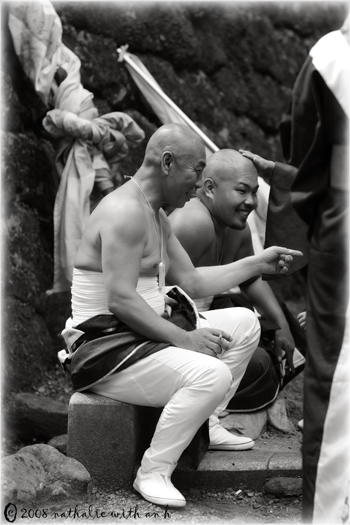 Honestly, I do not know what is happening here. It appears that the hand of a small child is rubbing the shaved cranium of one of the men. I wonder if Ross’ students try to pat his head too. 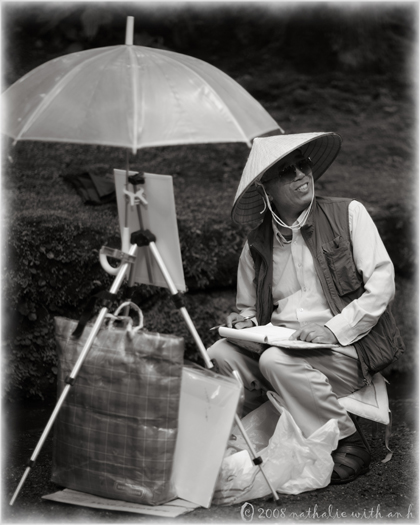 Purification troughs are typically found near the entrance of a Shinto shrine. There is a precise ritual involved in cleansing yourself: you need to fill a ladle with fresh water and clean both hands, then transfer some water from your cupped hand to your mouth, rinse it, and spit the water next to the fountain. You cannot put the ladle to your mouth nor are you ever supposed to swallow the water. A lot of people skip that step all together. 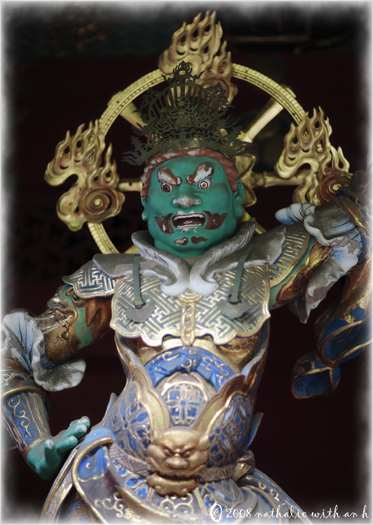 This is a God. 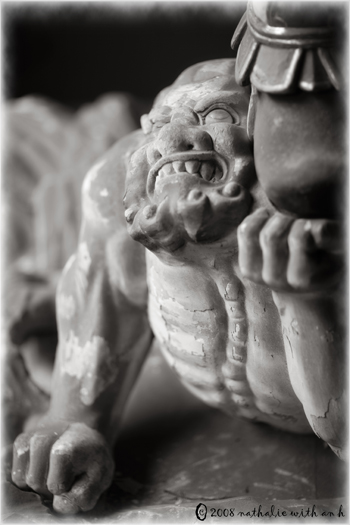 This is a photograph taken by Ross of someone holding what would appear to be a heavy God. 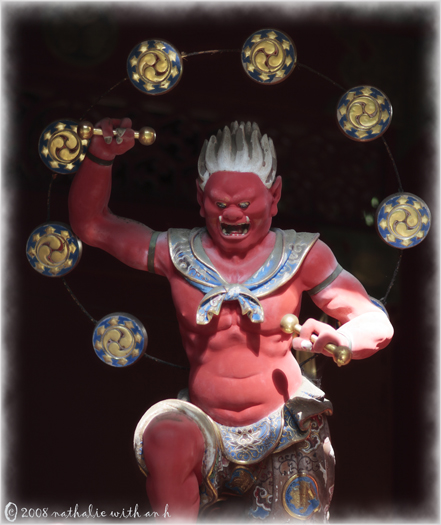 The God of Thunder 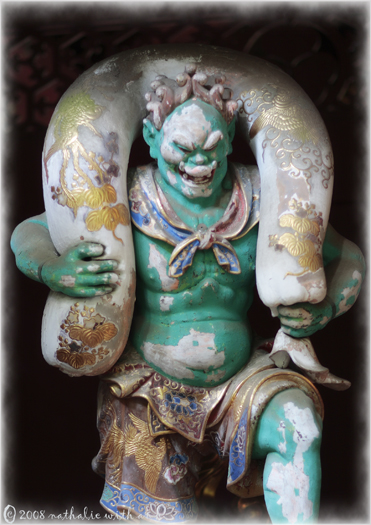 The God of Wind 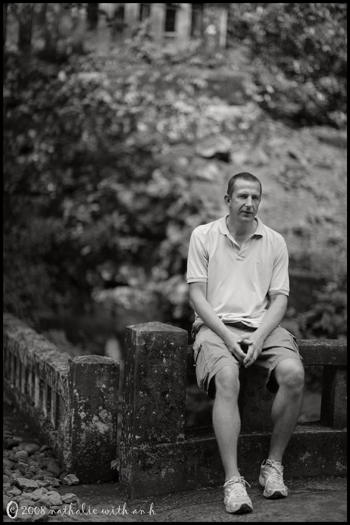 While we visited, a dance festival was taking place in front of the five storied pagoda. At first, I attempted to photograph it holding the camera with one hand and the umbrella with the other, but I gave up because frankly the process lacked the comfort factor. At the end however, the weather improved, and poor Ross who thought we were driving back to Numata was in store for an other hour of Japanese dancing photography. Ross is a very patient man (thank you!)