Noelle remembers my past better than I do. We have known each other since we were 10 years old and attended the same class at the Lycee Francais in Brussels. We both came from respective highly dysfunctional families and while not discussing our lives at home at the time, we probably unconsciously bonded over this common situation.

Noelle tells me I used to confide in her being relentlessly seeking the forbidden. I remember being a wild child but not expanding on the reasons. She reminds me of the immaculate walls in my house, and how my father would go ballistic on us if we forgetfully rested our fingers upon them. She recalls how after learning to put the thermometer on the radiator to feign illness, I spent most of my time at home instead of school. I was eleven. I was a mess. Noelle is my voice of the past. Sometimes, I think it would be better if she stayed silent.

Noelle and I had a lovely walk at the Luxembourg Garden (Luco) in Paris back in May.

There was an “artistic installation” called “Some Wind in the Trees.” On each ribbon was the inscription “Etre dans le vent est une ambition de feuille morte” which means “To be in the wind is the ambition of a dead leaf.” It was inspired by the masts you find in Tibetan monasteries.

Children can rent sailboats at the special cart. 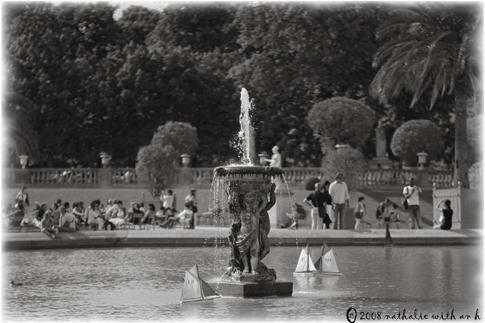 Then they can lose them on the pond.

The Luxembourg Garden is on the cutting edge of the fashion world. 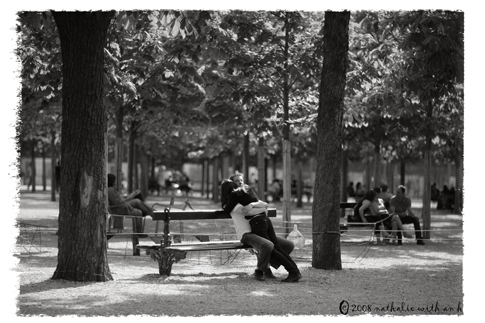 Of course, it has its fair share of lovers on a bench.

Places to read in peace.

Fabulous bronze statues. The original Statue of Liberty is at the Garden but I was too lazy to walk this far.

This is “L’Effort” by Pierre Roche. It depicts one of the twelve labors of Heracles, the cleaning of the Augean Stables in one day.

The back of “Le Triomphe de Silene” by Aime Jules Dalou. Kind of looks like this butt, don’t you think?

There is a whole area devoted to chess playing. On the above picture, the whites are not doing that well.

The player are fascinating to watch. So serious! Except the guy in the middle. 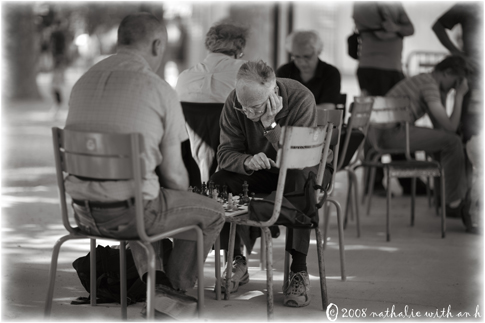 Their concentration is intense. 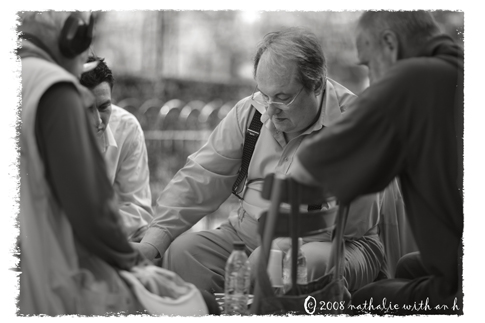 No pastis drinking here! And no women in sight. Chess players. Not the funniest bunch.

Unlike the Petanque players. They are a whole different story. Noelle and I ate many crepes watching them argue.

The spectacle is also in the audience. Look at the man next to the tree. Typical Frenchman with a little beret! 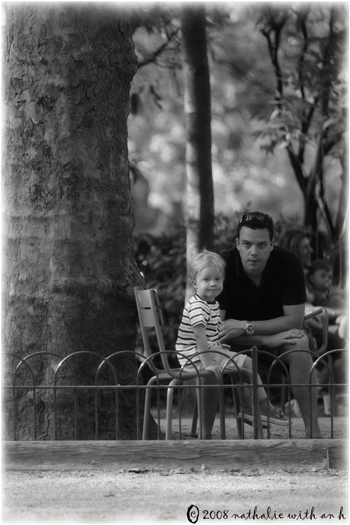 Father and son. Forget baseball! In France, it is the art of boules which is transmitted from generation to generation. Petanque players have much better manners too. No spitting. No scratching. And it’s co-ed! I’m routing for baseboule and its cochonnet.

Noelle and I ate way too many crepes. After hours spent sitting and eating, she had to go home and prepare dinner for her husband and the three children, Louise, Diane and Gael.

I stayed behind to take a picture of the crepe menu and ate just one more little crepe for the road. Then I did not feel very well and I had to sit some more…