I fell in love with the pig…

And the lazy bastard had to open a store. I have decided a long time ago that I was much more talented at encouraging (harassing) others to promote themselves than to do it for myself. I’m not even trying anymore and I ran out of business cards four months ago. I’m pathetic.

When I saw a drawing of a planet with a pig Cochon and a little man foraging for truffles on the blog of Sir planetross, I told him I wanted a pig shirt. Much prodding ensued.

“Get off the couch and go work on these drawings. Canadians will still be playing hockey tomorrow!”

“Don’t let Kelly Pettit‘s idea of a good time interfere with your work!”

“Do you think graphics for tee-shirts grow in rice fields?!”  (Monsieur planetross lives in Japan in the middle of mountains, hot water springs where men bathe all naked and a lot of rice fields)

A difficult delivery (breech if you will) but a full line of tee-shirts, mugs, and other stuff too

We had our fair share of artistic differences. When planetross sent me this graphic: 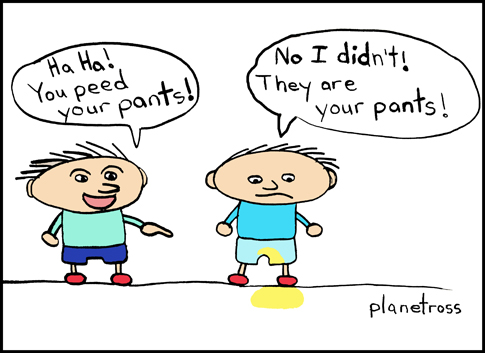 I questioned his good judgment. Would people ever buy a shirt with a little boy who peed his pants (even if they weren’t his)? Apparently yes. Monsieur Shinn was the first one to say he totally wanted one! So I caved in.

And I got my pig shirt too! 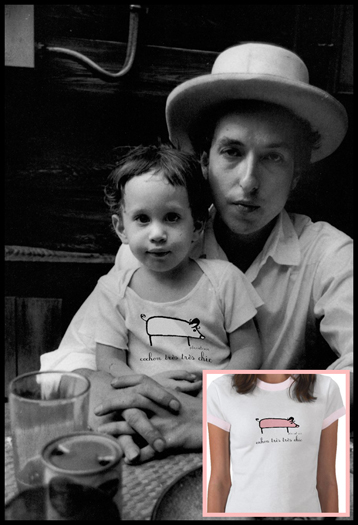 Even our President decided that the inspirational messages on the shirts were quite appropriate for the campaign trail:

“Maybe the light at the end of the tunnel is just the entrance to a lighted tunnel.” 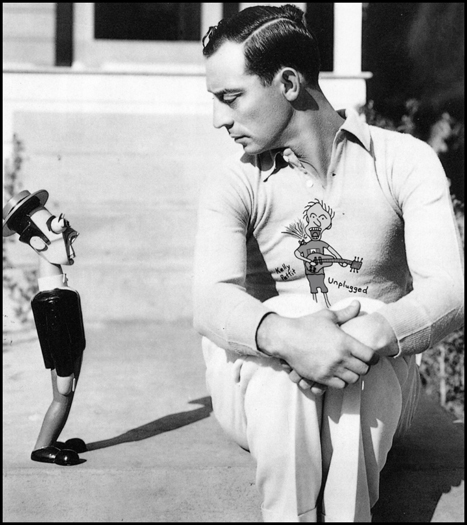 Many famous actors are hopping on the bandwagon (or whatever that expression is) and are adopting planetross’ sense of fashion (I’d never thought I’d say that in a million years, trust me!) 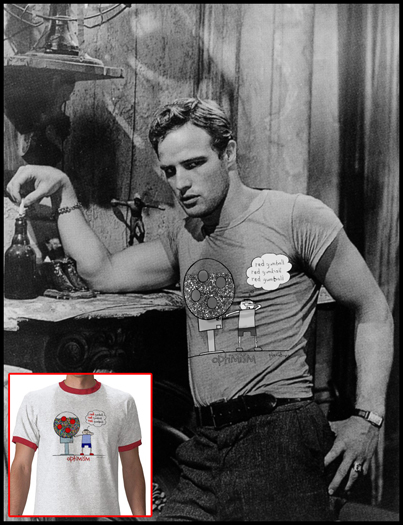 All the graphics are declined in women’s, men’s, children’s tee shirts, mugs and mouse pads (except for the “coffee mugging” line which is only for mugs and therefore not really a line to be exact.) 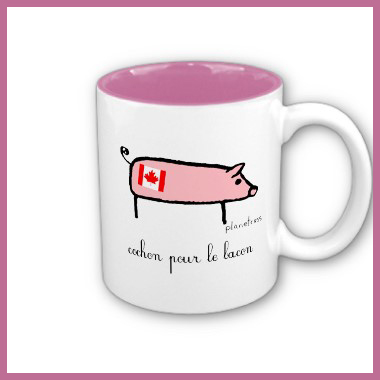 Why buy a regular boring mouse pad when you could buy a beauty like this one?

Also, the lines are quite sporty as evidenced by this shot taken at some kind of golf event. 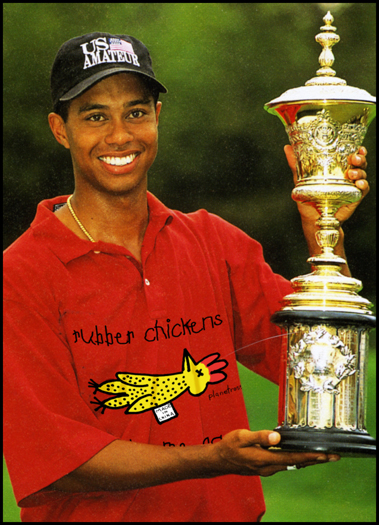 Generally I’m not one much in favor of red and yellow together but I think it works rather well here.

In summary, it’s all in good fun, the items make splendid gifts, and please go buy something otherwise the boy will never get off his lazy bum again and he will tell me “I told you so” ad nauseam, and I’ll have to eat crow for months at the time, and you would not want that for me now, would you?

Leave an innocent comment on my blog and next thing you know… You are the story. So here is to you, Matt, just because… Ever since I added you to my blogroll, you haven’t produced a single post. You let me down. I don’t like to be let down. 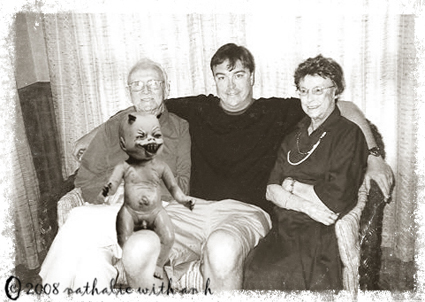 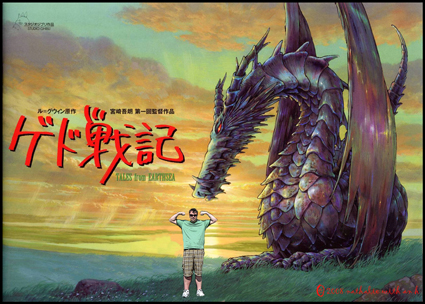 Matt the Dragon Slayer, I think

Now Matt, I understand you would like to dedicate your time and grey matter to higher intellect endeavors, but come on, nothing could ever be as much fun as blogging! Whom will you taunt with your usual obnoxiousness?

One last one… For the road.

Sorry Allison! Before enrolling your help, I should have stipulated you were fair game too.

Carte Blanche? To moi? Are you NUTS?

Fair warning to potential clients: if given carte blanche, I might come up with something you had not quite expected!

On a very fine morning, Mr. Shinn bestowed upon me the honor of designing a surprise birthday gift for his lovely wife. After meeting him and his hilarious 22 year old son Blake, I quickly realized the word “conventional” would be stricken out of the thesaurus for this specific project (oh twist my arm!) Compelling all funny and outrageous synapses to come forward and volunteer for the mission, I decided to create a Funky Blake Calendar.

Some of the most “daring” concepts were discussed prior to execution, then the photographs of Blake were taken.

The Shinns nicely agreed to let me share with you some of the different months, so here we go: 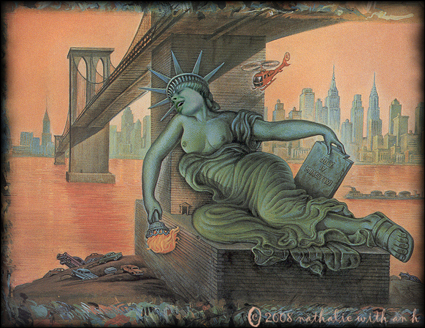 For good measure, the month of December featured the infamous Mr. Shinn himself:

This happened four years ago. Mrs. Shinn was GREATLY amused. I am told the calendar still lies prominently on the living room coffee table.

“Bill daaahlin’, I decided to surprise you with a nice long vacation in the South Pacific. It’s really pretty in Moorea this time of year, and you can repair our relations with the French while you are there and that should take you at the very least two months.

Here is some money for a pareo and pina coladas with little umbrellas. If you send me a postcard, I’ll make sure to frame it. Au revoir!”

If I were Hillary, I would have exiled the man a long time ago.

Ever since January when Bill Clinton re-injected race into the campaign despite recent party bigwig pleas not to do so (the Jesse Jackson comment), I have been wondering about his motives (incidentally, Ted Kennedy endorsed Obama a few days later.) Does Bill Clinton really want to be the spouse of the Decider-in-chief? Does he really want to run the risk of his spouse turning into a better president than he once was?

When during a speech, Bill Clinton not only disinters the subject of Bosnia, but also brings up the fact that Hillary is sixty, and that “when they (the reporters) are sixty, they will forget something when they are tired at 11 o’clock at night too”, what logically comes to mind is the question of what happens to a sixty year old at 3 am if she can’t handle 11 pm. You know: that phone call.

I just don’t buy the whole white knight in shining armor routine. I think he is out to get her. Consciously or not. Not that I care one way or the other, but I can’t help but question.